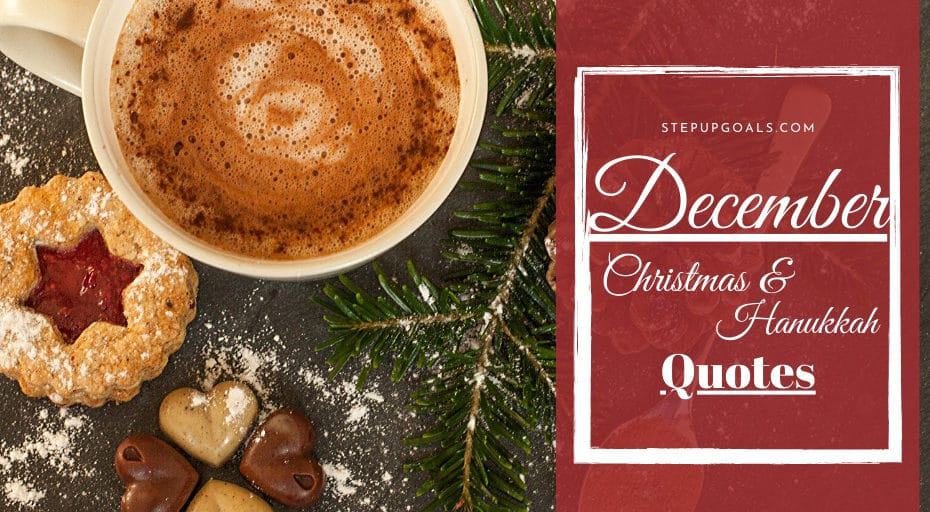 Finally, it’s that time of year again. Warm up with some hot chocolate and these beautiful quotes on December, Christmas and Hanukkah quotes.

There are some interesting holidays in December (besides Christmas):

Facts About The Month Of December

What Is So Special About The Month Of December

“The crisp path through the field in this December snow, in the deep dark, where we trod the buried grass like ghosts on dry toast.”
― Dylan Thomas

“December is a bewitching month.
The grey of cold teases
to explode into something worthwhile,
into a dream of cold,
a starlight shower you can taste,
a cold that does not chill.”
― Joseph Coelho

“It is never over, though we are in December!”
― Ernest Agyemang Yeboah

“By December an elastic skin of ice reached out hundreds of miles into the sea, rolling with every wave.”
― Will Chancellor

“December is the holdout month, all the others torn away.”
― Anne Gisleson

“It is December, and nobody asked if I was ready.”
― Sarah Kay

“December, being the last month of the year, cannot help but make us think of what is to come.”
― Fennel Hudson

“The cold is coming. December’s winter solstice. Start of the season.”
― Robert Pettit

“Want to keep Christ in Christmas? Feed the hungry, clothe the naked, forgive the guilty, welcome the unwanted, care for the ill, love your enemies, and do unto others as you would have done unto you.”
― Steve Maraboli

“The main reason Santa is so jolly is because he knows where all the bad girls live.”

“I will honor Christmas in my heart, and try to keep it all the year.”
― Charles Dickens

“Our hearts grow tender with childhood memories and love of kindred, and we are better throughout the year for having, in spirit, become a child again at Christmastime.”
― Laura Ingalls Wilder

“My idea of Christmas, whether old-fashioned or modern, is very simple: loving others. Come to think of it, why do we have to wait for Christmas to do that?”
― Bob Hope

“Christmas waves a magic wand over this world, and behold, everything is softer and more beautiful. ”
― Norman Vincent Peale

“Christmas is doing a little something extra for someone.”
― Charles M. Schulz

“I will honour Christmas in my heart, and try to keep it all the year. I will live in the Past, the Present, and the Future. The Spirits of all Three shall strive within me. I will not shut out the lessons that they teach.”
― Charles Dickens

“In the old days, it was not called the Holiday Season; the Christians called it ‘Christmas’ and went to church; the Jews called it ‘Hanukkah’ and went to synagogue; the atheists went to parties and drank. People passing each other on the street would say ‘Merry Christmas!’ or ‘Happy Hanukkah!’ or (to the atheists) ‘Look out for the wall!”
― Dave Barry

“He who has not Christmas in his heart will never find it under a tree.”
― Roy L. Smith

“Blessed is the season which engages the whole world in a conspiracy of love.”
― Hamilton Wright Mabie

“If my Valentine you won’t be,
I’ll hang myself on your Christmas tree.”
― Ernest Hemingway

“Christmas is not a time nor a season, but a state of mind. To cherish peace and goodwill, to be plenteous in mercy, is to have the real spirit of Christmas.”
― Calvin Coolidge

“Christmas is built upon a beautiful and intentional paradox; that the birth of the homeless should be celebrated in every home.”
― G.K. Chesterton

“Christmas, children, is not a date. It is a state of mind. ”
― Mary Ellen Chase

“One of the most glorious messes in the world is the mess created in the living room on Christmas day. Don’t clean it up too quickly.”
― Andy Rooney

“When we recall Christmas past, we usually find that the simplest things – not the great occasions – give off the greatest glow of happiness.”
― Bob Hope

“A lovely thing about Christmas is that it’s compulsory, like a thunderstorm, and we all go through it together.”
― Garrison Keillor

“Christmas is a necessity. There has to be at least one day of the year to remind us that we’re here for something else besides ourselves.”
― Eric Severeid

“Happy, happy Christmas, that can win us back to the delusions of our childish days; that can recall to the old man the pleasures of his youth; that can transport the sailor and the traveler, thousands of miles away, back to his own fire-side and his quiet home!”
― Charles Dickens

“What kind of Christmas present would Jesus ask Santa for?”
― Salman Rushdie

“Christmas it seems to me is a necessary festival; we require a season when we can regret all the flaws in our human relationships: it is the feast of failure, sad but consoling.”
― Graham Greene

“Christmas is a day of meaning and traditions, a special day spent in the warm circle of family and friends.”
― Margaret Thatcher

“Like the Maccabees, most people want the right to pray to God in their own way. This right is called freedom of religion. The spirit of Hanukkah, the Festival of Lights, is shared by all people who love freedom.”
― Norma Simon

“The proper response, as Hanukkah teaches, is not to curse the darkness but to light a candle.”
― Irving Greenberg

“The light of kindness and goodness in our heart is ultimately what we must tap into. We do not so much “fight the darkness (of hate and bigotry)” as we illuminate it when we unite our own inner light with the inner light shining in our fellow brothers and sisters”
― Aimee Ginsburg Bikel

“To me every hour of the light and dark is a miracle, every cubic inch of space is a miracle.”
― Walt Whitman

“May the light illuminate your hearts and shine in your life every day of the year. May everlasting peace be yours and upon our Earth.”
― Eileen Anglin

“Hanukkah is about the spark of the divine in all of us made in God’s image.”
― Suzanne Fields

“At this time of year, when the sun is most hidden, the holiday of Hanukkah celebrates the rays of hope and light. Often, it is through simple and unrecognized miracles that we are able to feel the warmth of hope and light.”
― Rafael Goldstein

“The darkness of the whole world cannot swallow the glowing of a candle.”
― Robert Altinger

“Just as Hanukkah candles are lighted one by one from a single flame, so the tale of the miracle is passed from one man to another, from one house to another, and to the whole House of Israel throughout the generations.”
― Judah Leon Magnes