April Quotes – For The Love Of Spring 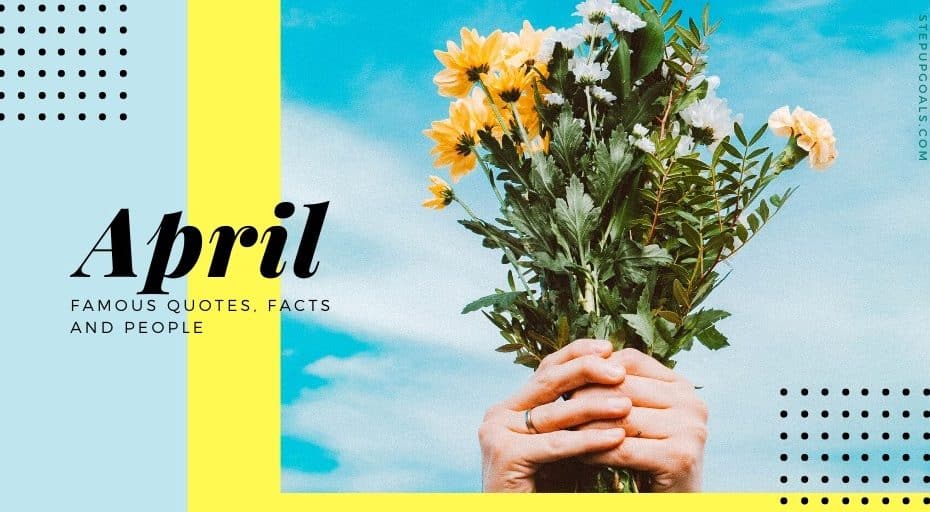 It is also the month (or day) of practical jokes and hoaxes. April Fools’ Day is a centuries-old tradition but is particularly popular since the 19th century.

Facts About The Month Of April

“April hath put a spirit of youth in everything.”
― William Shakespeare

“The April winds are magical, And thrill our tuneful frames; The garden walks are passional To bachelors and dames.”
― Ralph Waldo Emerson

“To what purpose, April, do you return again?
Beauty is not enough.
You can no longer quiet me with the redness
Of little leaves opening stickily.
I know what I know.
The sun is hot on my neck as I observe
The spikes of the crocus.
The smell of the earth is good.
It is apparent that there is no death.
But what does that signify?
Not only underground are the brains of men
Eaten by maggots.
Life in itself
Is nothing,
An empty cup, a flight of uncarpeted stairs.
It is not enough that yearly, down this hill,
April
Comes like an idiot, babbling and strewing flowers.”
― Edna St. Vincent Millay

“April is the kindest month. April gets you out of your head and out working in the garden.”

“Summer is only the unfulfilled promise of spring, a charlatan in place of the warm balmy nights I dream of in April. It’s a sad season of life without growth…It has no day.”
― F. Scott Fitzgerald

“They came on one of April’s most brilliant days–a day as sparkling as a newly-washed lemon…a day when even the shadows were a melange of blue and orange and jade, like the shadows that poured from the tipsy brush of Monet.”
― Beverley Nichols

“Although I was born in April, I’m quite certain I was not fully awake until October~”
― Peggy Toney Horton

“Here cometh April again, and as far as I can see the world hath more fools in it than ever.”
― Charles Lamb

“Some people can’t be fooled on April Fool’s Day because they were fooled too many times during their entire lifetime.”
― Akash B Chandran

“When bullying April bruised mine eyes
With sleet-bound appetites and crude
Experiments of green, I still was wise
And kissed the blossoming rod.”
― Cecil Day-Lewis

“April weather, rain and sunshine both together.”
― English Country Saying

“If April showers should come your way, they bring the flowers that bloom in May.”
― Buddy de Sylva

“Why are people so tired on April 1st? Because they just finished a 31-day March.”
― Unknown

“The first of April is the day we remember what we are the other 364 days of the year.”
― Mark Twain

“But it is a sort of April-weather life that we lead in this world. A little sunshine is generally the prelude to a storm.”
― William Cowper

“April was just beginning, and after the warm spring day it turned cooler, slightly frosty, and a breath of spring could be felt in the soft, cold air. The road from the convent to town was sandy, they had to go at a walking pace; and on both sides of the carriage, in the bright, still moonlight, pilgrims trudged over the sand. And everyone was silent, deep in thought, everything around was welcoming, young, so near— the trees, the sky, even the moon—and one wanted to think it would always be so.”
― Anton Chekov

“You can cut all the flowers but you cannot keep Spring from coming.”
― Pablo Neruda

“Nostalgia in reverse, the longing for yet another strange land, grew especially strong in spring.”
― Vladimir Nabokov

“It is spring again. The earth is like a child that knows poems by heart.”

“It’s spring fever. That is what the name of it is. And when you’ve got it, you want—oh, you don’t quite know what it is you do want, but it just fairly makes your heartache, you want it so!”
― Mark Twain

“That is one good thing about this world…there are always sure to be more springs.”
― L.M. Montgomery

“I suppose the best kind of spring morning is the best weather God has to offer.”

“I can still bring into my body the joy I felt at seeing the first trillium of spring, which seemed to be telling me, “Never give up hope, spring will come.”
― Jessica Stern

“At the best of times, spring hurts depressives.”
― Angela Carter

“Spring never looks at what the previous year has left it to work with. For you see, the issue is not the amount that’s left. The issue is the privilege to have any amount.”
― Craig D. Lounsbrough

Singers And Musicians Born In April

Scientists And Artists Born In April

previousMarch Quotes + What No One Tells You About March
nextWarm December, Christmas And Hanukkah Quotes
Tags:april quotesfamous quotesmonth of april