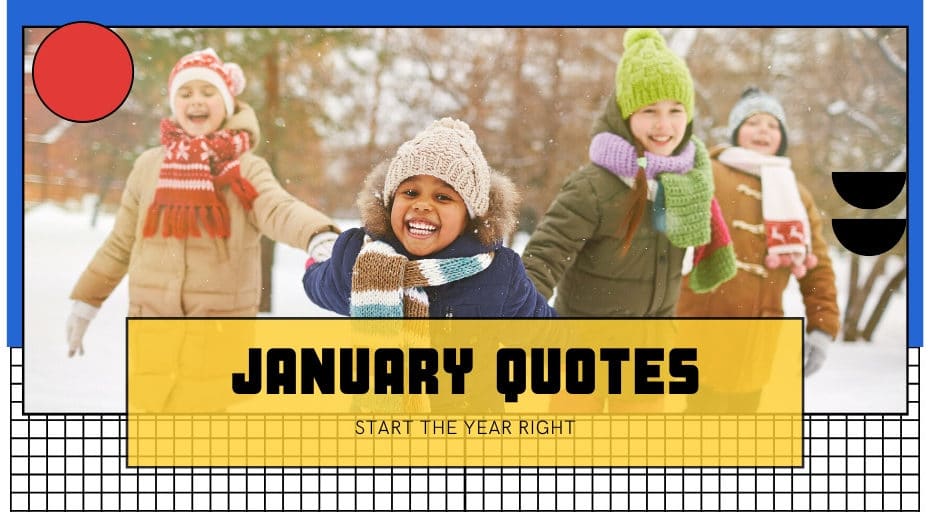 The month of January typically sees two types of people – tired, hungover people and go-getters ready to tackle the new year out of the gate. It is up to you into which group you’re gonna line up this year.

Are you hungry for success and ready to make it happen?

There are some interesting holidays in January:

Facts About The Month Of January

What Is So Special About The Month Of January

The first month of the year,

A perfect time to start all over again,

“Lots of people go mad in January. Not as many as in May, of course. Nor June. But January is your third most common month for madness.”
― Karen Joy Fowler

“It’s January and I’m kicking snow off the ground. I just threw out the flower you made me promise to water, handle with care, because I was too careless, you said. Careless with things and people, around me and behind
and I remember being still for just a second or two, thinking that it’s so much easier to leave and start anew, than take care of what’s already here.”
― Charlotte Eriksson

“If winter comes, can spring be far behind?”
― Percy Bysshe Shelley

“I am in no mood to fulminate on paper–I wish the two of us were in a room together talking of what matters most, the air thick with affinity. In January a man crawls into a cave of hopelessness; he hallucinates sympathies catching fire. Letters are glaciers, null frigates, trapping us where we are in the moment, unable to carry us on toward truth.”
― Carlene Bauer

“Plant carrots in January and you’ll never have to eat carrots.”

“Dickensian poverty tends to occur after Christmas in January. For it is then, with pockets empty, diary decimated and larder bare, that the general populace sinks into a collective pauper’s hibernation until Valentine’s Day.”
― Stewart Stafford

“We spend January 1 walking through our lives, room by room, drawing up a list of work to be done, cracks to be patched. Maybe this year, to balance the list, we ought to walk through the rooms of our lives… not looking for flaws, but for potential.”
― Ellen Goodman

“Ten Things To Do In January:

• Read a good book
• Get a Library Card
• Walk 30 minutes a day
• Send a Birthday card to a friend
• Invest in a Fitness Tracker
• Buy a Coin jar and save those quarters and nickels
• Donate to a Charity
• Volunteer 45 minutes of your time to an Organization
• Take a Yoga Class
• Volunteer at Bingo night a Nursing Home”
― Charmaine J. Forde

“Snow is diamonds for a faery’s feet;
Blithely and bonnily she trips along,
Her lips a-carol with a merry song,
And in her eyes the meaning… Life is sweet!”
― Ruby Archer

“The heart can get really cold if all you’ve known is winter.”
― Benjamin Alire Sáenz

“What good is the warmth of summer, without the cold of winter to give it sweetness.”
― John Steinbeck

“Are the days of winter sunshine just as sad for you, too? When it is misty, in the evenings, and I am out walking by myself, it seems to me that the rain is falling through my heart and causing it to crumble into ruins.”
― Gustave Flaubert

“In the winter she curls up around a good book and dreams away the cold.”
― Ben Aaronovitch

“No animal, according to the rules of animal-etiquette, is ever expected to do anything strenuous, or heroic, or even moderately active during the off-season of winter.”
― Kenneth Grahame

“A lot of people like snow. I find it to be an unnecessary freezing of water.”
― Carl Reiner

“Surely everyone is aware of the divine pleasures which attend a wintry fireside; candles at four o’clock, warm hearthrugs, tea, a fair tea-maker, shutters closed, curtains flowing in ample draperies to the floor, whilst the wind and rain are raging audibly without.”
― Thomas De Quincey

“Even the strongest blizzards start with a single snowflake.”
― Sara Raasch

“Winter is not a season, it’s an occupation.”
― Sinclair Lewis

“Snow flurries began to fall and they swirled around people’s legs like house cats. It was magical, this snow globe world.”
― Sarah Addison Allen

“I know the look of an apple that is roasting and sizzling on the hearth on a winter’s evening, and I know the comfort that comes of eating it hot, along with some sugar and a drench of cream… I know how the nuts taken in conjunction with winter apples, cider, and doughnuts, make old people’s tales and old jokes sound fresh and crisp and enchanting.”
― Mark Twain

“Winter is much like unrequited love; cold and merciless.”
― Kellie Elmore

“Eyes so young, so full of pain … Two lonely drops of winter rain … And no tear could these eyes sustain … For too much had they seen.”
― Shaun Hick

“Winter hung in there, like an invalid refusing to die. Day after grey day the ice stayed hard; the world remained unfriendly and cold.”
― Neil Gaiman

“I wonder if the snow loves the trees and fields, that it kisses them so gently? And then it covers them up snug, you know, with a white quilt; and perhaps it says, “Go to sleep, darlings, till the summer comes again.”
― Lewis Carroll

“The snow doesn’t give a soft white damn whom it touches.”
― E.E. Cummings

“I love you because no two snowflakes are alike, and it is possible, if you stand tippy-toe, to walk between the raindrops.”
― Nikki Giovanni

“The snow began to fall again, drifting against the windows, politely begging entrance and then falling with disappointment to the ground”
― Jamie McGuire

“I love snow for the same reason I love Christmas: It brings people together while time stands still. Cozy couples lazily meandered the streets and children trudged sleds and chased snowballs. No one seemed to be in a rush to experience anything other than the glory of the day, with each other, whenever and however it happened.”
― Rachel Cohn

“Well, I know now. I know a little more how much a simple thing like a snowfall can mean to a person”
― Sylvia Plath

“…there’s just something beautiful about walking on snow that nobody else has walked on. It makes you believe you’re special, even though you know you’re not.”
― Carol Rifka Brunt

“Thank goodness for the first snow, it was a reminder–no matter how old you became and how much you’d seen, things could still be new if you were willing to believe they still mattered.”
― Candace Bushnell