Dreamy September Quotes To Revel In 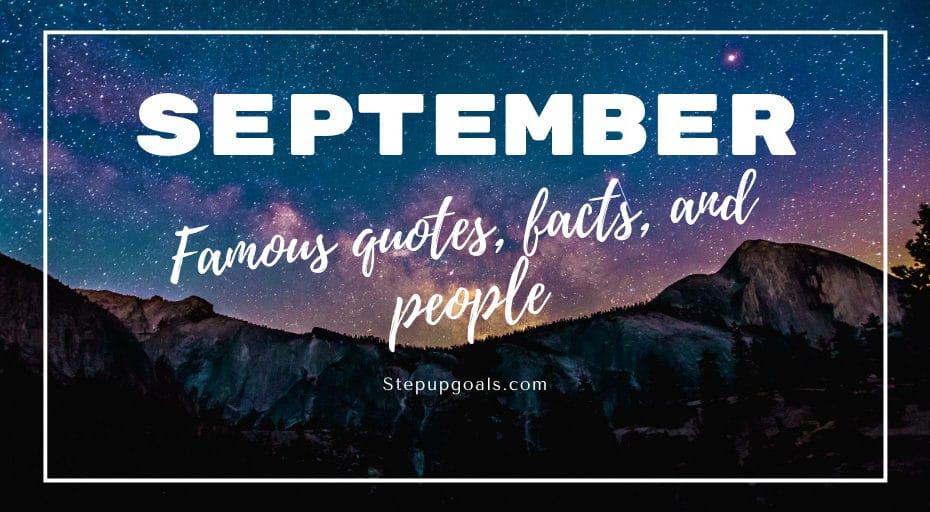 September is a different beast depending on which Hemisphere you’re on. It’s the end of summer in the north and end of winter in the south. You can see why some people are cheering while others feel somber.

September is also the Self Improvement Month in the U.S. It reminds us to keep working on ourselves and never to be content on our journey.

RELATED: How To Wake Up Early And Gain Back A Whole Month For Yourself

While you’re listening to this Earth, Wind & Fire September song on a loop, read about the holidays we have in September and also where it got its name. Plus there are also beautiful September quotes and a list of notable people born in September.

There are some interesting holidays in September:

Facts About The Month Of September

What Is So Special About The Month Of September

“We know that in September, we will wander through the warm winds of summer’s wreckage. We will welcome summer’s ghost.”
― Henry Rollins

“For all I can really do is
stand here
in September’s rain
savoring…
soaking it all in
slipping..
and simply
holding on to poetry
for dear life.”
― Sanober Khan

“Outside the leaves on the trees constricted slightly; they were the deep done green of the beginning of autumn. It was a Sunday in September. There would only be four. The clouds were high and the swallows would be here for another month or so before they left for the south before they returned again next summer.”
― Ali Smith

“Tonight I miss you like the sky misses his moon; a delicate epiphany growing on grass. I serenade the breeze into dancing a cha cha cha; the mountains echo in the background. September sky never looked more charming; or the sublime petals of the rose looked so graceful.”
― Avijeet Das

“I used to love September, but now it just rhymes with remember.”

“But when fall comes, kicking summer out on its treacherous ass as it always does one day sometime after the midpoint of September, it stays awhile like an old friend that you have missed. It settles in the way an old friend will settle into your favorite chair and take out his pipe and light it and then fill the afternoon with stories of places he has been and things he has done since last he saw you.”
― Stephen King

“Let’s strive to be better in September!”
― Charmaine J. Forde

“September was a thirty-days long goodbye to summer, to the season that left everybody both happy and weary of the warm, humid weather and the exhausting but thrilling adventures. It didn’t feel like fresh air either, it made me suffocate. It was like the days would be dragging some kind of sickness, one that we knew wouldn’t last, but made us uncomfortable anyway. The atmosphere felt dusty and stifling.”
― Lea Malot

“High up on Monte Salvatore the window of some shepherd’s hut opened a golden eye. The roses hung their heads and dreamed under the still September clouds, and the water plashed and murmured softly among the pebbles of the shore.”
― E.L. Voynich

“[T]hat old September feeling, left over from school days, of summer passing, vacation nearly done, obligations gathering, books and football in the air … Another fall, another turned page: there was something of jubilee in that annual autumnal beginning, as if last year’s mistakes had been wiped clean by summer.”
― Wallace Stegner

“it strikes me that the spirit of the Fourth, this year, was used up by September’s end and fell like an early leaf.”
― William H. Gass

“September: it was the most beautiful of words, he’d always felt, evoking orange-flowers, swallows, and regret.”
― Alexander Theroux

“Ah, September! You are the doorway to the season that awakens my soul… but I must confess that I love you only because you are a prelude to my beloved October.”
― Peggy Toney Horton

“In his or her own way, everyone I saw before me looked happy. Whether they were really happy or just looked it, I couldn’t tell. But they did look happy on this pleasant early afternoon in late September, and because of that I felt a kind of loneliness new to me, as if I were the only one here who was not truly part of the scene.”
― Haruki Murakami

“In short, a bad Sunday of September, in September of that traitor who let you go a big wave passed upon him, like a gunshot between the prickly pears.”
― Giovanni Verga

“No matter how many losing seasons you might have had in the past with your marriage, the good thing is that all teams get a fresh start once September begins”
― Shon Hyneman

“But now in September the garden has cooled, and with it my possessiveness. The sun warms my back instead of beating on my head … The harvest has dwindled, and I have grown apart from the intense midsummer relationship that brought it on.”
― Robert Finch

“In many ways, September feels like the busiest time of the year: The kids go back to school, work piles up after the summer’s dog days, and Thanksgiving is suddenly upon us.”
― Brene Brown

Singers And Musicians Born In September

previousQuotes That Describe 2020 – The Good, The Bad, The Ugly
nextQuotes That Make You Smile On A Bad Day
Tags:month of septemberseptember quotes