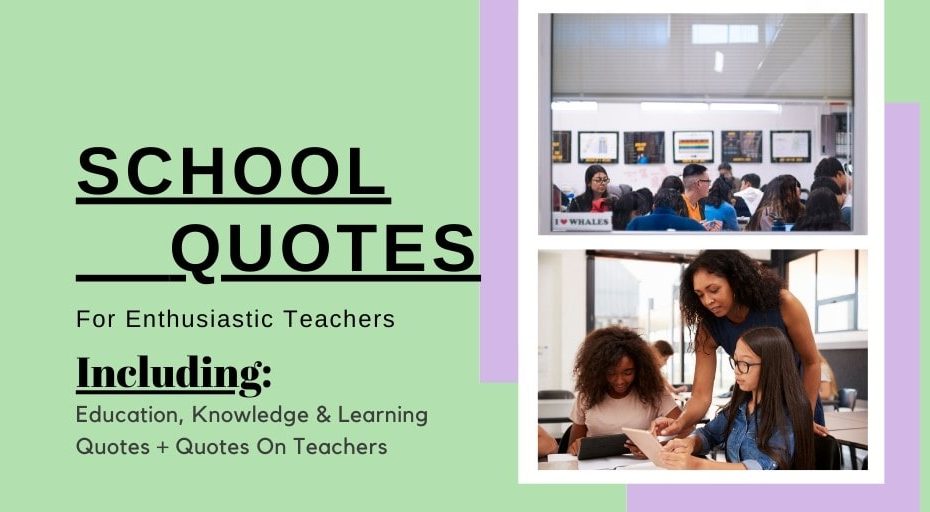 What makes a good teacher? Knowing all the facts? Having a class fool of good grades? Or having a way of inspiring their students and making them interested in the topic in front of them?

While I’m not a teacher myself, I do remember my school days and I can tell you that the best teachers (and most memorable ones) were the ones that would tell us stories and backgrounds of given topics. Once we’d have the “inside scoop”, we’d be all ears.

I’ve compiled these school quotes (but also quotes on education, knowledge, learning and of course teachers) mostly from goodreads.com. The site has thousands and thousands of quotes and it was no small feat to scour through them and find the best ones.

“School prepares you for the real world… which also bites.”
― Jim Benton (American illustrator and writer)

“The difference between school and life? In school, you’re taught a lesson and then given a test. In life, you’re given a test that teaches you a lesson.”
― Tom Bodett (American author, voice actor, and radio personality, primarily as a host, correspondent and panelist for a number of shows that air on National Public Radio)

“School is a building which has four walls with tomorrow inside.”
― Lon Watters ((1914 -1995) artist who also worked in publishing, specifically yearbook publishing)

“It’s one of my favorite seasons of the year: Back to School. As a kid, I loved fresh school supplies, new outfits, the change of seasons, and the chance to crack open a new textbook.”
― Dana Perino ((born May 9, 1972) is an American political commentator and author who served as the twenty-fourth White House Press Secretary, serving under President George W. Bush)

“You know, sometimes kids get bad grades in school because the class moves too slow for them. Einstein got D’s in school. Well guess what, I get F’s!!!”
― Bill Watterson (American former cartoonist and the author of the comic strip Calvin and Hobbes)

“While one is young is the time to investigate, to experiment with everything. The school should help its young people to discover their vocations and responsibilities, and not merely cram their minds with facts and technical knowledge; it should be the soil in which they can grow without fear, happily and integrally.”
― Jiddu Krishnamurti ((11 May 1895 – 17 February 1986) was an Indian philosopher, speaker and writer)

“What is the most important thing one learns in school? Self-esteem, support, and friendship.”
― Terry Tempest Williams ((born 8 September 1955), is an American writer, educator, conservationist, and activist)

“We had some good times at school. I didn’t know how good those times was till I left, but I guess that’s the way of it”
― Ron Rash, Serena ((September 25, 1953), an American poet, short story writer and novelist)

“Education is the most powerful weapon which you can use to change the world.”
― Nelson Mandela ((18 July 1918 – 5 December 2013) was a South African anti-apartheid revolutionary, political leader, and philanthropist)

“Education is the ability to listen to almost anything without losing your temper or your self-confidence.”
― Robert Frost ((March 26, 1874 – January 29, 1963) was an American poet)

“Education is our passport to the future, for tomorrow belongs to the people who prepare for it today.”
― Malcolm X (May 19, 1925 – February 21, 1965) was an American Muslim minister and human rights activist who was a popular figure during the civil rights movement)

“Give a girl an education and introduce her properly into the world, and ten to one but she has the means of settling well, without further expense to anybody. ”
― Jane Austen ((16 December 1775 – 18 July 1817) was a famous English novelist)

“Do not train a child to learn by force or harshness; but direct them to it by what amuses their minds, so that you may be better able to discover with accuracy the peculiar bent of the genius of each.”
― Plato (was an Athenian philosopher during the Classical period in Ancient Greece, founder of the Platonist school of thought, and the Academy, the first institution of higher learning in the Western world)

“The educated differ from the uneducated as much as the living differ from the dead.”
― Aristotle ((384–322 BC) was a Greek philosopher and polymath during the Classical period in Ancient Greece)

“Anyone who stops learning is old, whether at twenty or eighty. Anyone who keeps learning stays young.”
― Henry Ford ((July 30, 1863 – April 7, 1947) was an American industrialist and business magnate, founder of the Ford Motor Company and chief developer of the assembly line technique of mass production)

“Teaching is not a lost art, but the regard for it is a lost tradition.”
― Jacques Barzun ((November 30, 1907 – October 25, 2012) was a French-American historian known for his studies of the history of ideas and cultural history)

“They inspire you, they entertain you, and you end up learning a ton even when you don’t know it”
― Nicholas Sparks ((born December 31, 1965) is an American romance novelist and screenwriter. He has published twenty novels and two non-fiction books)

“I am indebted to my father for living, but to my teacher for living well. {His teacher was the legendary philosopher Aristotle}”
― Alexander the Great ((356 BC – 323 BC) was a king of Macedonia who conquered an empire that stretched from the Balkans to modern-day Pakistan)

“A teacher who loves learning earns the right and the ability to help others learn.”
― Ruth Beechick ((August 29, 1925 -November 27, 2013) was a teacher, professor, and curriculum developer)

“True teachers are those who use themselves as bridges over which they invite their students to cross; then, having facilitated their crossing, joyfully collapse, encouraging them to create their own.”
― Nikos Kazantzakis (18 February 1883 – 26 October 1957) was a Greek writer. Widely considered a giant of modern Greek literature, he was nominated for the Nobel Prize in Literature in nine different years)

“Teaching middle school is an adventure not a job.”
― Angela K. Bennett (American author and teacher)

“Let us remember: One book, one pen, one child and one teacher can change the world.”
― Malala Yousafzai (Pakistani activist for female education and the youngest Nobel Prize laureate)

“What the teacher is, is more important than what he teaches.”
― Karl Menninger ((July 22, 1893 – July 18, 1990) was an American psychiatrist and a member of the Menninger family of psychiatrists)

“The Master said, “A true teacher is one who, keeping the past alive, is also able to understand the present.”
(Analects 2.11)”
― Confucius ((551–479 BC) was a Chinese philosopher and politician of the Spring and Autumn period)

“To stimulate life, leaving it free, however, to unfold itself–that is the first duty of the educator.”
― Maria Montessori ((August 31, 1870 – May 6, 1952) was an Italian physician and educator best known for the philosophy of education that bears her name)

“Knowledge will bring you the opportunity to make a difference.”
― Claire Fagin ((born November 25, 1926) is an American nurse, educator, academic, and consultant)

“The only true wisdom is in knowing you know nothing.”
― Socrates ((470 – 399 BC) was a classical Greek (Athenian) philosopher credited as one of the founders of Western philosophy, and as being the first moral philosopher of the Western ethical tradition of thought)

“No thief, however skillful, can rob one of knowledge, and that is why knowledge is the best and safest treasure to acquire.”
― L. Frank Baum ((May 15, 1856 – May 6, 1919) was an American author chiefly famous for his children’s books)

“The possession of knowledge does not kill the sense of wonder and mystery. There is always more mystery.”
― Anais Nin ((February 21, 1903 – January 14, 1977) was a French-Cuban American diarist, essayist, novelist, and writer of short stories and erotica

“Knowledge, like air, is vital to life. Like air, no one should be denied it.”
― Alan Moore ((born 18 November 1953) is an English writer known primarily for his work in comic books including Watchmen, V for Vendetta, The Ballad of Halo Jones, Swamp Thing, Batman: The Killing Joke and From Hell)

“An investment in knowledge always pays the best interest.”
― Benjamin Franklin ((January 17, 1706 – April 17, 1790) was an American polymath and one of the Founding Fathers of the United States)

“What transforms this world is — knowledge. Do you see what I mean? Nothing else can change anything in this world. Knowledge alone is capable of transforming the world, while at the same time leaving it exactly as it is. When you look at the world with knowledge, you realize that things are unchangeable and at the same time are constantly being transformed.”
― Yukio Mishima ((Hiraoka Kimitake, January 14, 1925 – November 25, 1970) was a Japanese author, poet, playwright, actor, model, film director, nationalist, and founder of the Tatenokai)

“In learning you will teach, and in teaching you will learn.”
― Phil Collins ((born 30 January 1951) is an English drummer, singer, songwriter, multi-instrumentalist, record producer, and actor, best known as the drummer/singer of the rock band Genesis)

“You cannot open a book without learning something.”
― Confucius ((551–479 BC) was a Chinese philosopher and politician of the Spring and Autumn period)

Are there any school quotes that caught your eye? Tell me in the comments below!