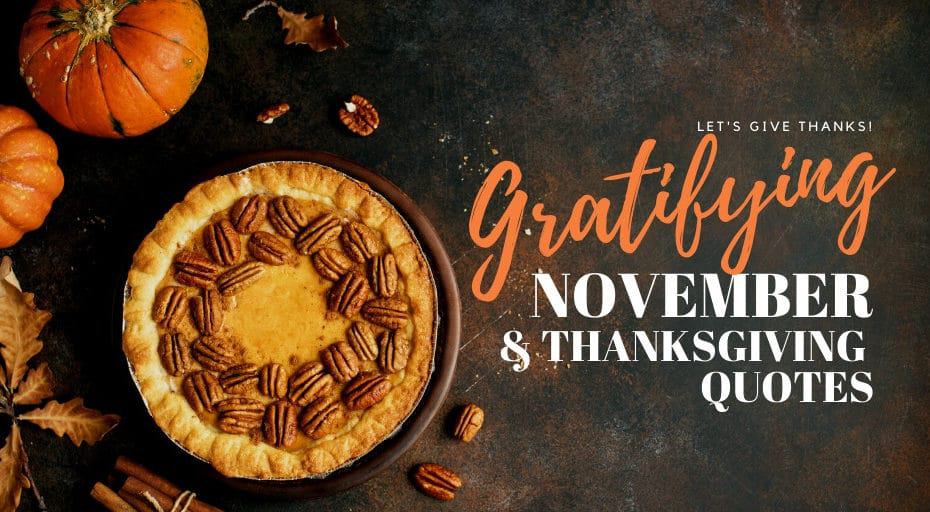 Get ready for turkey day and shopping with these gratifying November and Thanksgiving quotes.

There are some interesting holidays in November:

Facts About The Month Of November

What Is So Special About The Month Of November

“Welcome sweet November, the season of senses and my favorite month of all.”

“October extinguished itself in a rush of howling winds and driving rain and November arrived, cold as frozen iron, with hard frosts every morning and icy drafts that bit at exposed hands and faces.”
― J. K. Rowling

“November comes
And November goes,
With the last red berries
And the first white snows.

With night coming early,
And dawn coming late,
And ice in the bucket
And frost by the gate.

The fires burn
And the kettles sing,
And earth sinks to rest
Until next spring.”
― Clyde Watson

“But there is always a November space after the leaves have fallen when she felt it was almost indecent to intrude on the woods…for their glory terrestrial had departed and their glory celestial of spirit and purity and whiteness had not yet come upon them.”
― L. M. Montgomery

Have you seen my heart, somewhere in your castle of yellow leaves?”

― A Waltz for Zizi

“The house was very quiet, and the fog—we are in November now—pressed against the windows like an excluded ghost.”
― E. M. Forster

“The river this November afternoon
Rests in an equipoise of sun and cloud:
A glooming light, a gleaming darkness shroud
Its passage. All seems tranquil, all in tune.”
― Cecil Day-Lewis

“Gmorning
November
You lurch & you lumber
From bonfire to ember
From waking to slumber
You deaden the grass
& you piss in the pot
The birds all haul ass
And the pumpkins all rot
Remember, November:
Momentous elections
Ignite us, divide us,
Divine new directions
November—
Chill.

“Autumn! The greatest show of all times!”
― Mehmet Murat Ildan

“November at its best – with a sort of delightful menace in the air.”
― Anne Bosworth Greene

“In November, the earth is growing quiet. It is making its bed, a winter bed for flowers and small creatures. The bed is white and silent, and much life can hide beneath its blankets.”
― Cynthia Rylant

“And we will serenade and make love to the passion of November!”
― Avijeet Das

“November always seemed to me the Norway of the year.”
― Emily Dickinson

“It was a cold November day and she had dressed herself up in layers of cardigans and covered the whole lot with her old tweed coat, the one she might have used for feeding the chickens in.”
― Barbara Pym

“The November evening had a bite; it nibbled not-quite-gently at her cheeks and ears. In Virginia the late autumn was a lover, still, but a dangerous one.”
― J. Aleksandr Wootton


“In November, the trees are standing all sticks and bones. Without their leaves, how lovely they are, spreading their arms like dancers. They know it is time to be still.”
― Cynthia Rylant

“November is usually such a disagreeable month…as if the year had suddenly found out that she was growing old and could do nothing but weep and fret over it. This year is growing old gracefully…just like a stately old lady who knows she can be charming even with gray hair and wrinkles. We’ve had lovely days and delicious twilights.”
― L. M. Montgomery

“There is October in every November and there is November in every December! All seasons melted in each other’s life!”
― Mehmet Murat Ildan

“In November, the smell of food is different. It is an orange smell. A squash and pumpkin smell. It tastes like cinnamon and can fill up a house in the morning, can pull everyone from bed in a fog. Food is better in November than any other time of the year.”

“Don’t wait until the fourth Thursday in November, to sit with family and friends to give thanks.
Make every day a day of Thanksgiving!”
― Charmaine J Forde

“Jam in November took away the worries, It was like tasting summer…”
― El Fuego

“I celebrated Thanksgiving in an old-fashioned way. I invited everyone in my neighborhood to my house, we had an enormous feast, and then I killed them and took their land.”
― Jon Stewart

“After a good dinner one can forgive anybody, even one’s own relations.”
― Oscar Wilde

“I like football. I find it’s an exciting strategic game. It’s a great way to avoid conversation with your family at Thanksgiving.”
― Craig Ferguson

“If you are really thankful, what do you do? You share.”
― W. Clement Stone

“I know what I’m having for Thanksgiving and it ain’t turkey.”
― Anthony T. Hincks

“Why wait until the first Tuesday after Thanksgiving to give,
Just give a little every day and help somebody along the way”
― Charmaine J. Forde

“I love Thanksgiving because it’s a holiday that is centered around food and family, two things that are of utmost importance to me.”
― Marcus Samuelsson

“Express gratitude for the greatness of small things.”
― Richie Norton

previousIrresistible October Quotes For Autumn Feels
nextMarch Quotes + What No One Tells You About March
Tags:november quotesthanksgiving quotes