Unexpected May Quotes And Facts 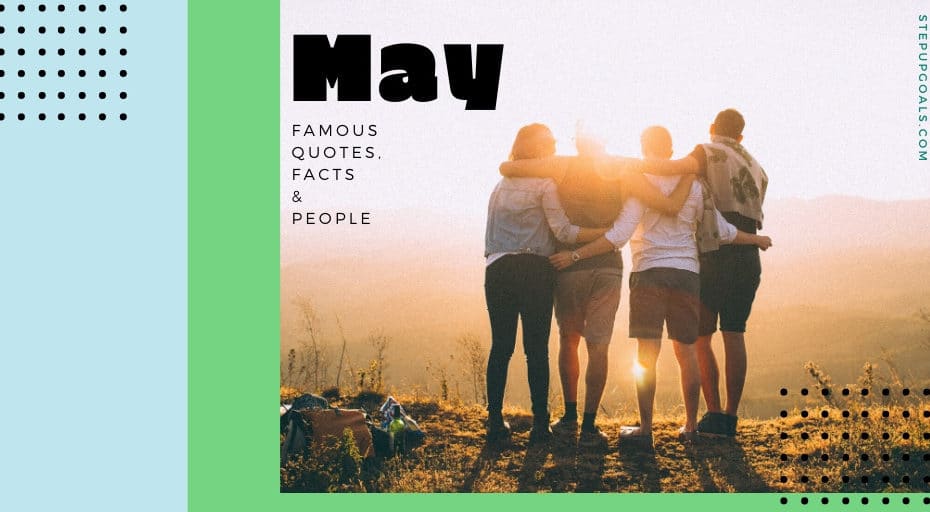 Most people like the month of May because June is coming and so is the summer (or winter in Southern Hemisphere) and they can already feel the Sun and holidays coming closer.

But we shouldn’t dismiss May just yet as it has plenty of popular holidays. May Day (May 1), Cinco de Mayo (May 5) and Star Wars Day May 4) and Mother’s Day (Second Sunday in May) are all in May!

Some other interesting May holidays include

Facts About The Month Of May

What Is So Special About The Month Of May

“In the deepening spring of May, I had no choice but to recognize the trembling of my heart. It usually happened as the sun was going down. In the pale evening gloom, when the soft fragrance of magnolias hung in the air, my heart would swell without warning, and tremble, and lurch with a stab of pain. I would try clamping my eyes shut and gritting my teeth, and wait for it to pass. And it would pass –but slowly, taking its own time, and leaving a dull ache behind.”
― Haruki Murakami

“At last came the golden month of the wild folk – honey-sweet May, when the birds come back, and the flowers come out, and the air is full of the sunrise scents and songs of the dawning year.”
― Samuel Scoville Jr.

“You are as welcome as the flowers in May.”
― Charles Macklin

“May, more than any other month of the year, wants us to feel most alive.”
― Fennel Hudson

“Along with the greening of May came the rain. Then the clouds disappeared and a soft pale lightness fell over the city, as if Kyoto had broken free of its tethers and lifted up toward the sun. The mornings were as dewy and verdant as a glass of iced green tea. The nights folded into pencil-gray darkness fragrant with white flowers. And everyone’s mood seemed buoyant, happy, and carefree.”
― Victoria Abbott Riccardi

“May is green and pink and red”
― Richard L. Ratliff

“May: the lilacs are in bloom. Forget yourself.”
― Marty Rubin

“I thought that spring must last forevermore; For I was young and loved, and it was May.”
― Vera Brittain

“Then you have to remember to be thankful; but in May one simply can’t help being thankful . . . that they are alive, if for nothing else. I feel exactly as Eve must have felt in the garden of Eden before the trouble began.”
― L.M. Montgomery

“Among the changing months, May stands confest The sweetest, and in fairest colors dressed.”
― James Thomson

“Ah, in those earliest days of love how naturally the kisses spring into life! So closely, in their profusion, do they crowd together that lovers would find it as hard to count the kisses exchanged in an hour as to count the flowers in a meadow in May.”
― Marcel Proust

“The world’s favorite season is the spring. All things seem possible in May.”
― Edwin Way Teale

“The month of May is the pleasant time; its face is beautiful; the blackbird sings his full song, the living wood is his holding, the cuckoos are singing and ever singing; there is a welcome before the brightness of the summer.”
― Lady Gregory

“Let all thy joys be as the month of May, And all thy days be as a marriage day.”
― Francis Quarles

“As it fell upon a day
In the merry month of May,
Sitting in a pleasant shade
Which a grove of myrtles made.”
― Richard Barnfield

“The month of May has come, when every lusty heart beginneth to blossom, and to bring forth fruit.”
― Thomas Malory

“And a bird overhead sang Follow,
And a bird to the right sang Here;
And the arch of the leaves was hollow,
And the meaning of May was clear.”
― Algernon Charles Swinburne

“As full of spirit as the month of May, and as gorgeous as the sun in Midsummer.”
― William Shakespeare

“And after winter folweth grene May.”
― Geoffrey Chaucer

Famous People Born In May

Actors Born In May

Singers And Musicians Born In May

Scientists, Artists & Other Notables Born In May

previous57 Highly Effective Life Lessons Quotes To Soak In Before It’s Too Late
next101 Cute Short Quotes – Put A Smile Back On Your Face
Tags:may quotesmonth of mayspring quotes