March Quotes + What No One Tells You About March 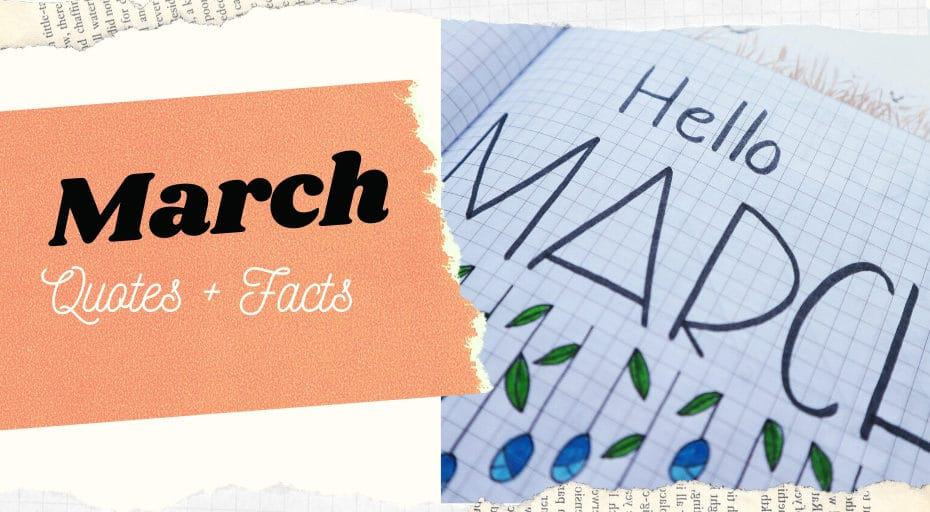 It’s March again. Time to drink green beer (or just beer) and enjoy some sunshine finally. With our favorite holiday – St Patrick’s Day just around the corner, let’s see what more does March have in store.

There are some interesting holidays in March:

Facts About The Month Of March

1. The name for March comes from Mars, the Roman god of war. It’s the same in both the Julian and Gregorian calendars.

“In ancient Roman religion and myth, Mars (Latin: Mārs, pronounced [maːrs]) was the god of war and also an agricultural guardian, a combination characteristic of early Rome.[2] He was second in importance only to Jupiter and he was the most prominent of the military gods in the religion of the Roman army. Most of his festivals were held in March, the month named for him (Latin Martius), and in October, which began the season for military campaigning and ended the season for farming.”

2. March is the most unproductive month of the year in the U.S. and it’s because of “March Madness”. Played mostly during March, it has become one of the most famous annual sporting events in the United States. Unproductive workers during March Madness amounted to an estimated $6.3 billion in corporate losses in 2017!

3. March was when military campaigns would resume that had previously been put on hold for winter.

4. The zodiac signs for the month of March are Pisces (until March 20) and Aries (March 21 onwards).

5. According to the oldest Roman calendars, one year was ten months long, beginning in March and ending in December. Because December was the tenth month, it was named for the number ten in Latin (Decem), just like September was named for seven (Septem).

6. With the exception of the recent War on Afghanistan, almost all major US-NATO led military operations since the invasion of Vietnam have begun in the month of March.

7. It was in March 1889 that the Eiffel Tower was officially opened to the public. It was the tallest building in the world for 41 years before being surpassed by the Chrysler Building.

8. On March 29th, 1886 that Coca-Cola was developed. The original formula included a small amount of cocaine to give the drinker a bit of a buzz.

“It was one of those March days when the sun shines hot and the wind blows cold: when it is summer in the light, and winter in the shade.”
― Charles Dickens

“By March, the worst of the winter would be over. The snow would thaw, the rivers begin to run and the world would wake into itself again…”
― Neil Gaiman

“POOR MARCH
It is the HOMELIEST month of the year. Most of it is MUD, Every Imaginable Form of MUD, and what isn’t MUD in March is ugly late-season SNOW falling onto the ground in filthy muddy heaps that look like PILES of DIRTY LAUNDRY.”
― Vivian Swift

“Only those with tenacity can march forward in March”

“This is the perfume of March: rain, loam, feathers, mint. Every morning and afternoon, I drink fresh mint tea sweetened with honey.”
― Lisa Kleypas

“It was an overcast day, but the cloudy weather did not detract from the signs of spring that were evident all around them. It was the second week in March, and the official start of the season was just a couple of weeks away. The magnolia trees had already bloomed, and tulips, daffodils, and wildflowers were shooting up all around the convent’s gardens.”
― Rosanna Chiofalo

“In March the soft rains continued, and each storm waited courteously until its predecessor sunk beneath the ground.”
― John Steinbeck

“Our life is March weather, savage and serene in one hour. We go forth austere, dedicated, believing in the iron links of Destiny, and will not turn on our heel to save our life: but a book, or a bust, or only the sound of a name, shoots a spark through the nerves, and we suddenly believe in will…”
― Ralph Waldo Emerson

“February is merely as long as it is needed to pass the time until March.”
― J.R. Stockton

“Indoors or out, no one relaxes
In March, that month of wind and taxes,
The wind will presently disappear,
The taxes last us all the year.”
― Ogden Nash

“March came in that winter like the meekest and mildest of lambs, bringing days that were crisp and golden and tingling, each followed by a frosty pink twilight which gradually lost itself in an elfland of moonshine.”
― L.M. Montgomery

“In March the soft rains continued, and each storm waited courteously until its predecessor sunk beneath the ground.”
― John Steinbeck

“December days were brief and chill,
The winds of March were wild and drear,
And, nearing and receding still,
Spring never would, we thought, be here.”
― Arthur Hugh Clough

Singers And Musicians Born In March

Scientists And Artists Born In March

Which one is your favorite quote about March? Did you find any of the facts interesting?