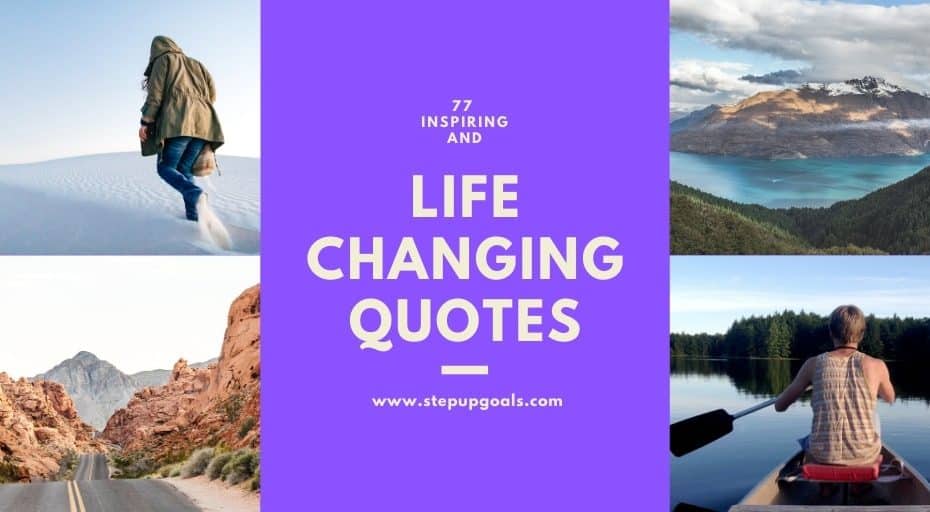 You’ve come to the best place to find inspiring and life changing quotes. Bookmark this page as I’ll be adding more of them in the future.

“Books can be dangerous. The best ones should be labeled ‘This could change your life’.”

I think the same could go for inspiring quotes.

If you’re hungry for more quotes that you can share with your friends and family, check out my other articles:

Some of these inspiring quotes are short, some are long but they all can be life changing. The first one on the list is my personal favorite. It was made by Paul Rennée Belobersycky, a Canadian musician, professionally known as Paul Brandt.

“Don’t tell me the sky’s the limit when there are footprints on the moon.”

“Don’t tell me the sky’s the limit when there are footprints on the moon.”
― Paul Brandt

“The only time you fail is when you fall down and stay down.”
― Stephen Richards

“Success is a decision, not a gift.”
― Steve Backley

“Life is like a steering wheel, it only takes one small move to change your entire direction.”
― Kellie Elmore

“People are where they believe they belong”
― Sheila Tiller-Tooks

“And once the storm is over, you won’t remember how you made it through, how you managed to survive. You won’t even be sure, whether the storm is really over. But one thing is certain. When you come out of the storm, you won’t be the same person who walked in. That’s what this storm’s all about.”
― Haruki Murakami

“If you think you can then you can.”
― Stephen Richards

“Don’t be pushed around by the fears in your mind. Be led by the dreams in your heart.”
― Roy T. Bennett

“The trouble is if you don’t spend your life yourself, other people spend it for you.”
― Peter Shaffer

“Success will be within your reach only when you start reaching out for it.”
― Stephen Richards

“Act like a champion, and then become one.”
― Steve Backley

“Happiness is not the absence of problems, it’s the ability to deal with them.”
― Steve Maraboli

“You’ve got to get obsessed and stay obsessed.”
― John Irving

“Life can only be understood backwards, but it must be lived forwards.”
― Soren Kierkegaard

“To create more positive results in your life, replace ‘if only’ with ‘next time’.”
― Unknown

“Do what is right, not what is easy nor what is popular.”
― Roy T. Bennett

“By changing nothing, nothing changes.”
― Tony Robbins

“You miss 100 percent of the shots you never take.”
― Wayne Gretzky

“It doesn’t matter where you are, you are nowhere compared to where you can go.”
― Bob Proctor

“One day your life will flash before your eyes. Make sure it’s worth watching.”
― Unknown

“Do one thing every day that scares you.”
― Eleanor Roosevelt

“You have power over your mind – not outside events. Realize this, and you will find strength.”
― Marcus Aurelius

“What you do makes a difference, and you have to decide what kind of difference you want to make.”
― Jane Goodall

“You can’t wait for inspiration. You have to go after it with a club.”
― Jack London

“It’s hard to beat a person who never gives up.”
― George Herman Ruth

“When someone tells me “no,” it doesn’t mean I can’t do it, it simply means I can’t do it with them.”
― Karen E. Quinones Miller

“The only person who can pull me down is myself, and I’m not going to let myself pull me down anymore.”
― C. JoyBell C.

“Our wounds are often the openings into the best and most beautiful part of us.”
― David Richo

“Risks must be taken because the greatest hazard in life is to risk nothing.”
― Leo F. Buscaglia

“When all is said and done, more is said than done.”
― Lou Holtz

“Once you realize you deserve a bright future, letting go of your dark past is the best choice you will ever make.”
― Roy T. Bennett

“Aerodynamically, the bumblebee shouldn’t be able to fly, but the bumblebee doesn’t know it so it goes on flying anyway.”
― Mary Kay Ash

“The problem with people is they forget that most of the time it’s the small things that count.”
― Jennifer Niven

“When you’re at the end of your rope, tie a knot and hold on.”
― Theodore Roosevelt

“You’ll never get ahead of anyone as long as you try to get even with him.”
― Lou Holtz

“Your life is an occasion. Rise to it.”
― Suzanne Weyn

“Your conscience is the measure of the honesty of your selfishness.
Listen to it carefully.”
― Richard Bach

“Imagination is the highest form of research.”
― Albert Einstein

“It’s not what you say out of your mouth that determines your life, it’s what you whisper to yourself that has the most power!”
― Robert T. Kiyosaki

“The strongest people find the courage and caring to help others, even if they are going through their own storm.”
― Roy T. Bennett

“The only way to make sense out of change is to plunge into it, move with it, and join the dance.”
― Alan Wilson Watts

“The individual who says it is not possible should move out of the way of those doing it.”
― Tricia Cunningham

“A bruise is a lesson… and each lesson makes us better.”
― George R.R. Martin

“Dreams are only dreams until you wake up and make them real.”
― Ned Vizzini

“Life gives us choices. You either grab on with both hands and just go for it, or you sit on the sidelines.”
― Christine Feehan

“Take it easy, but take it.”
― Woody Guthrie

“When the whole world is silent, even one voice becomes powerful.”
― Malala Yousafzai

“You cannot expect victory and plan for defeat.”
― Joel Osteen

“Destiny is a name often given in retrospect to choices that had dramatic consequences.”
― J.K. Rowling

“Reach high, for stars lie hidden in you. Dream deep, for every dream precedes the goal.”
― Rabindranath Tagore

“One of the best ways to influence people is to make them feel important.”
― Roy T. Bennett

“Books can be dangerous. The best ones should be labeled ‘This could change your life’.”
― Helen Exley

“Visualize this thing you want. See it, feel it, believe in it. Make your mental blueprint and begin.”
― Robert Collier

“If you had started doing anything two weeks ago, by today you would have been two weeks better at it.”
― John Mayer

“Whining is not only graceless, but can be dangerous. It can alert a brute that a victim is in the neighborhood.”
― Maya Angelou

“If you don’t know who you truly are, you’ll never know what you really want.”
― Roy T. Bennett

“We all pay for life with death, so everything in between should be free.”
― Bill Hicks

“Obstacles are things a person sees when he takes his eyes off his goal.”
― E. Joseph Cossman

How did you find these inspiring quotes? Can they be life changing quotes? Have you shared any of them with your friends?