June Quotes To Get Ready For Summer 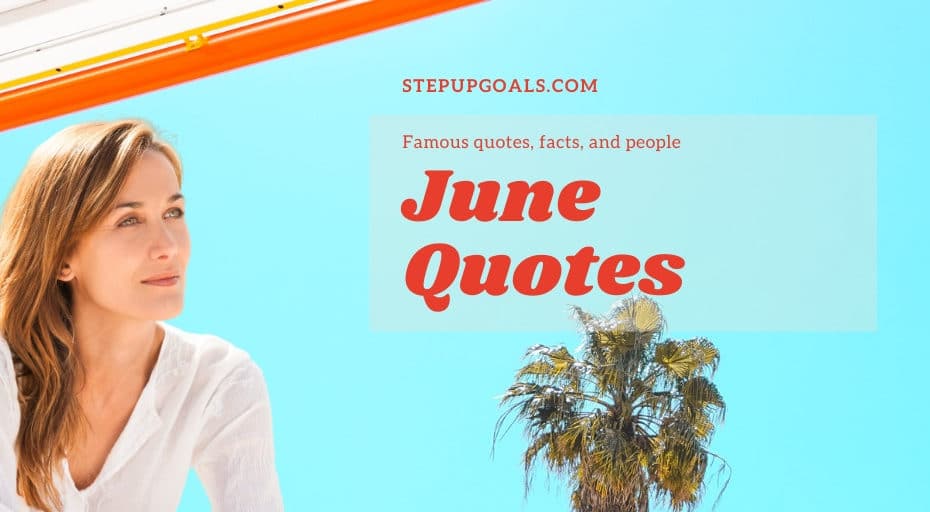 June is my favorite month. The weather is nice and it’s still not too warm. Also, the nights are cool, unlike July and August. But June is also the seasonal equivalent to December in the Southern Hemisphere!

In the Northern Hemisphere, the beginning of the traditional astronomical summer is 21 June (meteorological summer begins on 1 June).

There are some interesting holidays in June

Facts About The Month Of June

What Is So Special About The Month Of June

“Green was the silence, wet was the light,
the month of June trembled like a butterfly.”
― Pablo Neruda

“It was June, and the world smelled of roses. The sunshine was like powdered gold over the grassy hillside.”
― Maud Hart Lovelace

“I have laughed
more than daffodils
and cried more than June.”
― Sanober Khan

“I wonder what it would be like to live in a world where it was always June.”

“There are two seasons in Scotland: June and Winter”
― Billy Connolly

“June suns, you cannot store them
To warm the winter’s cold,
The lad that hopes for heaven
Shall fill his mouth with mould.”
― A.E. Housman

“In early June the world of leaf and blade and flowers explodes, and every sunset is different.”

“At midnight, in the month of June, I stand beneath the mystic moon.”
― Edgar Allan Poe

“Today has been a day dropped out of June into April.”
― L.M. Montgomery

“In June we picked the clover,
And sea-shells in July:
There was no silence at the door,
No word from the sky.

A hand came out of August
And flicked his life away:
We had not time to bargain, mope,
Moralize, or pray.”
― Cecil Day-Lewis

“This is the smell of June, she wanted to write to Christopher… honeysuckle, green hay, wet linen hung out to dry…”
― Lisa Kleypas

Get inspired by motivational wallpapers here.

“I almost wish we were butterflies and liv’d but three summer days – three such days with you I could fill with more delight than fifty common years could ever contain.”
― John Keats

“What good is the warmth of summer, without the cold of winter to give it sweetness.”
― John Steinbeck

“Summer afternoon—summer afternoon; to me those have always been the two most beautiful words in the English language.”
― Henry James

“A man says a lot of things in summer he doesn’t mean in winter.”
― Patricia Briggs

“It is better to be a young June bug than an old bird of paradise.”
― Mark Twain

“It is the month of June, The month of leaves and roses, When pleasant sights salute the eyes and pleasant scents the noses.”
― Nathaniel Parker Willis

“Rest is not idleness, and to lie sometimes on the grass under trees on a summer’s day, listening to the murmur of the water, or watching the clouds float across the sky, is by no means a waste of time.”
― John Lubbock

“June is the gateway to summer.”
― Jean Hersey

“Come with me,’ Mom says.
To the library.
Books and summertime
go together.”
― Lisa Schroeder

“Summertime is always the best of what might be.”
― Charles Bowden

“Summer bachelors like summer breezes, are never as cool as they pretend to be.”
― Nora Ephron

“And since all this loveliness can not be Heaven, I know in my heart it is June.”
― Abba Woolson

“Summer’s lease hath all too short a date.”
― William Shakespeare

“I love how summer just wraps it’s arms around you like a warm blanket.”
― Kellie Elmore

“I have only to break into the tightness of a strawberry, and I see summer – its dust and lowering skies.”
― Toni Morrison

Singers And Musicians Born In June