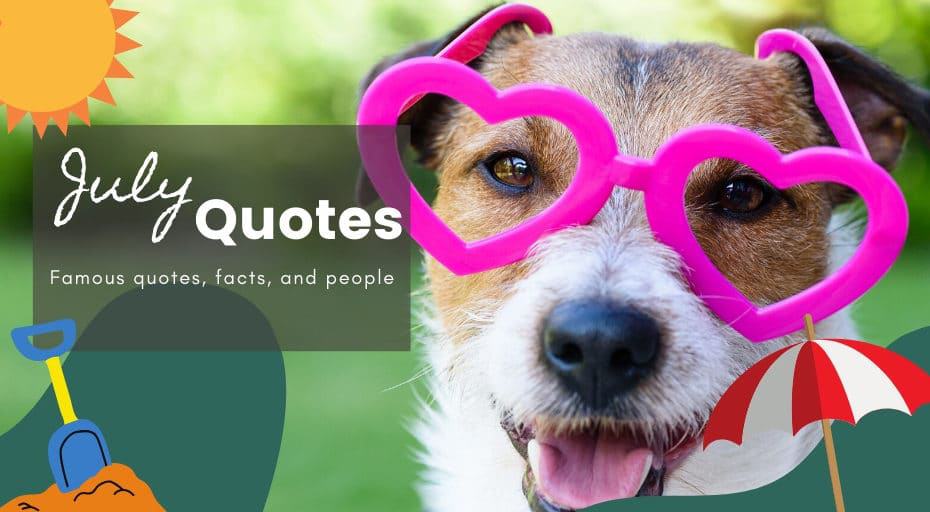 Summer has finally settled in and the dog days are here. Everyone just wants to go for a swim or lie down in the shade to cool off. With longer days there’s plenty of time for these outdoor activities.

See what interesting holidays we have in hot July and the best quotes we could find that describe July and summer feelings.

There are some interesting holidays in July:

Facts About The Month Of July

What Is So Special About The Month Of July

“July is a blind date with summer.”
― Hal Borland

“There comes a time when people get tired of being pushed out of the glittering sunlight of life’s July and left standing amid the piercing chill of an alpine November.”
― Martin Luther King Jr.

“Here men from the planet Earth first set foot upon the Moon. July 1969 AD. We came in peace for all mankind.”
― Neil Armstrong

“Being a traditionalist, I’m a rabid sucker for Christmas. In July, I’m already worried that there are only 146 shopping days left.”
― John Waters

“They talk about big skies in the western United States, and they may indeed have them, but you have never seen such lofty clouds, such towering anvils, as in Iowa in July.”
― Bill Bryson

“You have to love a nation that celebrates its independence every July 4th, not with a parade of guns, tanks, and soldiers who file by the White House in a show of strength and muscle, but with family picnics where kids throw Frisbees, the potato salad gets iffy, and the flies die from happiness. You may think you have overeaten, but it is patriotism.”
― Erma Bombeck

“I know I am but summer to your heart, and not the full four seasons of the year.”
― Edna St. Vincent Millay

“Summer afternoon—summer afternoon; to me, those have always been the two most beautiful words in the English language.”
― Henry James

“Let us dance in the sun, wearing wild flowers in our hair…”
― Susan Polis Schutz

“I felt like summer sunsets or July fireworks or chasing down the ice cream truck.”

“Summer has always been good to me, even the bittersweet end, with the slanted yellow light.”
― Paul Monette

If you enjoyed these quotes, you’ll also like Small Steps Lead To Great Success Quotes.

“Gather in the summer, gather in the winter; and you will have everything you want in the spring.”
― Alan Maiccon

“Silence. A summer-night silence which lay for a thousand miles, which covered the earth like a white and shadowy sea.”
― Ray Bradbury

“Sitting under a tree in a park in the summer, listening to birds and squirrels chirping while reading a good book is priceless.”
― Charmaine J. Forde

“Summer ain’t over till my glow says so!”
― Tracey Bond

“Summer the most beautiful feeling of the year,It’s the feel of warm sweet melody caressing ourselves , it’s the feeling of fresh breeze from the oceans, It’s the lovely feel of a warming slow waves touching u at the sandy beach, Summer is the Warm Magical touch of the Sun.”
― Motherly Love

“It was early summer. And everything, as it always does, began to heave and change.”

“But lurking behind every summer was a fall just waiting to happen.”
― Aaron Dries

Read next How Blinkist Transformed My Life And So Can Yours

Singers And Musicians Born In July

previousEmployee Goals – Make ’em Hard
nextHow Many Millionaires Are There In The World?
Tags:july quotessummer quotes