Wow! These Helen Keller Quotes Are Bold And Magical 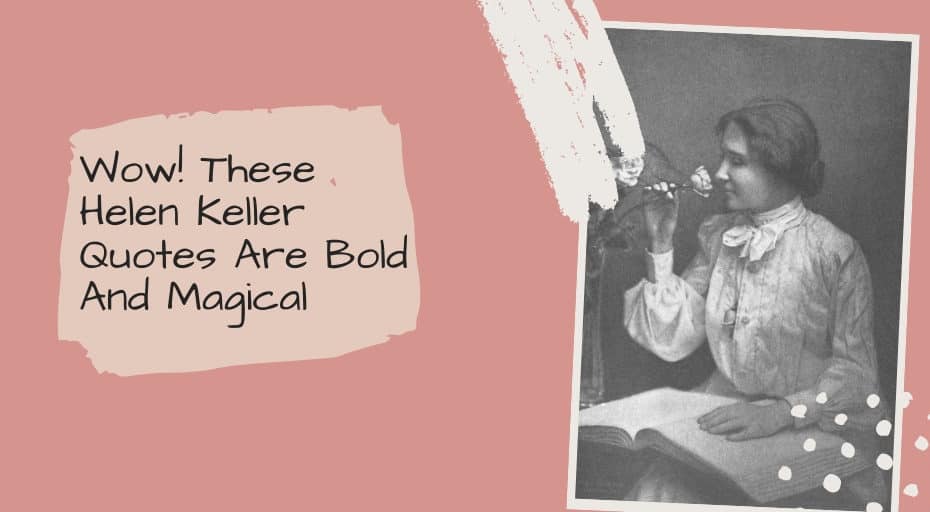 Who Was Helen Keller?

Helen Keller was an American author, political activist, and educator. She was born on June 27, 1880, in Tuscumbia, Alabama. At 19 months old, Keller contracted an unknown illness that left her both deaf and blind.

As Keller grew into childhood, she developed a limited method of communication with her companion, Martha Washington, the young daughter of the family cook. The two had created a type of sign language. She could also distinguish people by the vibration of their footsteps.

In 1888, Keller started attending the Perkins Institute for the Blind and in 1894, Keller moved to New York to attend the Wright-Humason School for the Deaf together with Anne Sullivan who was herself visually impaired. It was the beginning of a nearly 50-year-long relationship during which Sullivan evolved into Keller’s governess and eventually her companion.

In 1904, at the age of 24, Keller graduated from Radcliffe College of Harvard University, becoming the first deaf-blind person to earn a Bachelor of Arts degree.

Why Is Helen Keller Important?

Keller became a world-famous speaker and author. She is remembered as an advocate for people with disabilities, amid numerous other causes. In 1946 she toured the world on behalf of the American Foundation for Overseas Blind, continuing her advocacy for people with vision impairment.

Helen joined the American Foundation for the blind in 1921 and worked there for 40 years. Because of Helen, the U.S. created state commissions for the blind, rehabilitation centers were rebuilt, and education was made accessible to those with vision loss. Helen also received the highest civilian award in the United States, The Presidential Medal of Freedom, on September 14, 1964. Helen met many U.S. presidents and made great accomplishments all the way up to her death, on June 1st, 1968.

Keller met Mark Twain as a teenager in 1895 and was happy that he didn’t treat her like a freak but as a “handicapped woman seeking a way to circumvent extraordinary difficulties.” She bonded with his daughter that was the same age as her as they had similar political views. Twain also convinced the industrialist Henry Huttleston Rogers to help pay for Keller’s education.

Helen had mentors, here are 15 Reasons Why You Should Get A Mentor ASAP

2) She almost married her secretary

“Why was I so brazen – so forward with Peter? I was thirty-seven years old and had never been alone with a man, never mind a man with a mouth like night.”

In 1916, Peter Fagan was covering for her assistant Anne Sullivan while she was sick. At the time Keller was 36 years old and she fell in love with him. The lovers even planned to elope but Keller’s family found out and forbade the marriage due to her disabilities after her mother read the article published in The New York Times announcing the engagement and banished Peter from the house. It was a short-lived romance indeed.

3) Was a member of the Socialist Party

Not only did Keller help to found the American Civil Liberties Union (ACLU), but she was also a member of the Socialist Party and was investigated by the FBI thanks to her far-left views.

Helen was touring Japan in 1937 and at that time a Japanese police officer gave her an Akita dog named Kamikaze-Go as a present. It was the first adoption of the breed outside Japan. Unfortunately, Kamikaze-Go died within a year of her return to the United States but the Japanese Government gifted another Akita from the same litter to Keller.

5) A great deal of archival footage and material of Helen Keller was tragically lost on 9/11.

The offices of Helen Keller Worldwide were just a block away from the site and were unfortunately completely destroyed in the aftermath of the attacks.

“Helen Keller was blind and deaf when she graduated from college with honors. So what’s your problem?”

“When one door of happiness closes, another opens; but often we look so long at the closed door that we do not see the one which has been opened for us.”

“I would rather walk with a friend in the dark, than alone in the light.”

“The best and most beautiful things in the world cannot be seen or even touched. They must be felt with the heart”

“Death is no more than passing from one room into another. But there’s a difference for me, you know. Because in that other room I shall be able to see.”

“Life is either a daring adventure or nothing at all.”

“Although the world is full of suffering, it is full also of the overcoming of it.”

“One can never consent to creep when one feels an impulse to soar.”

“Character cannot be developed in ease and quiet. Only through experience of trial and suffering can the soul be strengthened, vision cleared, ambition inspired, and success achieved.”

“The most pathetic person in the world is someone who has sight but no vision.”

“Be of good cheer. Do not think of today’s failures, but of the success that may come tomorrow. You have set yourselves a difficult task, but you will succeed if you persevere, and you will find a joy in overcoming obstacles. Remember, no effort that we make to attain something beautiful is ever lost.”

“What we once enjoyed and deeply loved we can never lose, For all that we love deeply becomes a part of us.”

“Never bend your head. Hold it high. Look the world straight in the eye.”

“Science may have found a cure for most evils; but it has found no remedy for the worst of them all – the apathy of human beings.”

“People don’t like to think, if one thinks, one must reach conclusions. Conclusions are not always pleasant.”

“A bend in the road is not the end of the road…Unless you fail to make the turn.”

“Many persons have a wrong idea of what constitutes true happiness. It is not attained through self-gratification but through fidelity to a worthy purpose.”

“Face your deficiencies and acknowledge them; but do not let them master you. Let them teach you patience, sweetness, insight.”

“Relationships are like Rome – difficult to start out, incredible during the prosperity of the ‘golden age’, and unbearable during the fall. Then, a new kingdom will come along and the whole process will repeat itself until you come across a kingdom like Egypt… that thrives, and continues to flourish. This kingdom will become your best friend, your soul mate, and your love.”

“Optimism is the faith that leads to achievement ”

“Self-pity is our worst enemy and if we yield to it, we can never do anything good in the world.”

“Four things to learn in life: To think clearly without hurry or confusion; To love everybody sincerely; To act in everything with the highest motives; To trust God unhesitatingly.”

“Keep your face to the sunshine and you cannot see the shadows. It’s what the sunflowers do.”

“No pessimist ever discovered the secret of the stars or sailed an uncharted land, or opened a new doorway for the human spirit.”

“There are no shortcuts to any place worth going”

“I wonder what becomes of lost opportunities? Perhaps our guardian angel gathers them up as we drop them, and will give them back to us in the beautiful sometime when we have grown wiser, and learned how to use them rightly.”

“One painful duty fulfilled makes the next plainer and easier.”

“It is wonderful how much time good people spend fighting the devil. If they would only expend the same amount of energy loving their fellow men, the devil would die in his own tracks of ennui.”

“Do not think of today’s failures, but of the success, that may come tomorrow.”

“Until the great mass of the people shall be filled with the sense of responsibility for each others welfare, social justice can never be attained.”

“While they were saying it couldn’t be done, it was done.”

“Believe, when you are most unhappy, that there is something for you to do in the world. So long as you can sweeten another’s pain, life is not in vain.”

“A happy life consists not in the absence, but in the mastery of hardships.”

This is my favorite Helen Keller Quote

“The struggle of life is one of our greatest blessings. It makes us patient, sensitive, and Godlike. It teaches us that although the world is full of suffering, it is also full of the overcoming of it.”

“I seldom think about my limitations, and they never make me sad. Perhaps there is just a touch of yearning at times; but it is vague, like a breeze among flowers.”

“Many people know so little about what is beyond their short range of experience. They look within themselves – and find nothing! Therefore they conclude that there is nothing outside themselves either.”

“You have set yourselves a difficult task, but you will succeed if you persevere, and you will find a joy in overcoming obstacles. Remember, no effort that we make to attain something beautiful is ever lost. What I am looking for is not out there, it is in me.”