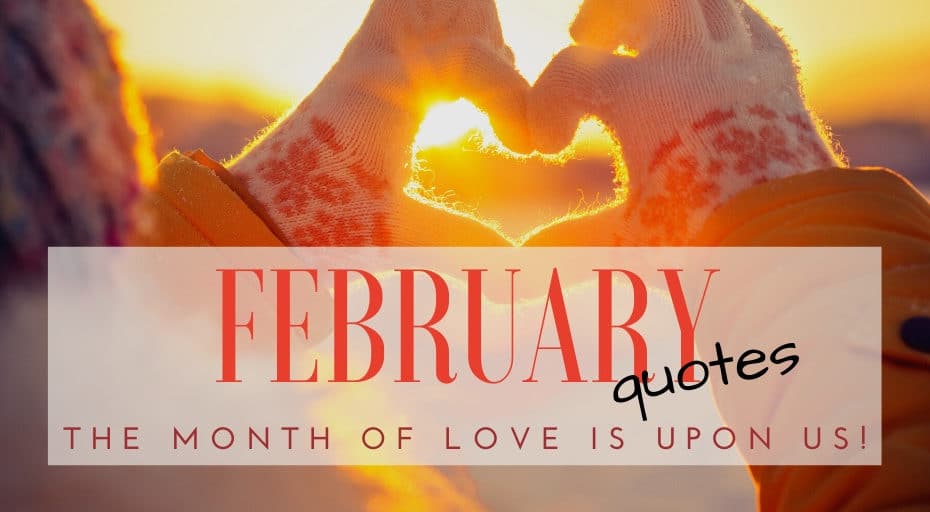 February, the month of love and one too famous groundhog. It’s also the last month of winter here in the Northern Hemisphere and everybody is looking forward to spring once again. Read our post to see what else is happening in February and of course, find some beautiful quotes on February and love.

There are some interesting holidays in February:

Facts About The Month Of February

What Is So Special About The Month Of February

“Though, February is short, it is filled with lots of love and sweet surprises”
― Charmaine J Forde

“February – the month of love..?!!
No wonder the shortest one in the calendar.”
― Dinesh Kumar Biran

“Why does February feel like one big Tuesday?”
― Todd Stocker

“Even though February was the shortest month of the year, sometimes it seemed like the longest.”
― JD Robb

“The February sunshine steeps your boughs and tints the buds and swells the leaves within”
―  William C. Bryant

“When God was making the months I think February was a mistake, like a burp. There it was, small, dark, and prickly. It had absolutely no redeeming qualities.”
― Shannon Wiersbitzky

“I used to try to decide which was the worst month of the year. In the winter I would choose February. I had it figured out that the reason God made February short a few days was because he knew that by the time people came to the end of it they would die if they had to stand one more blasted day.”
― Katherine Paterson

“February is the border between winter and spring.”
―  Terri Guillemets

“February, when the days of winter seem endless and no amount of wistful recollecting can bring back any air of summer.”
―  Shirley Jackson

“While it is February one can taste the full joys of anticipation. Spring stands at the gate with her finger on the latch”
―  Patience Strong

“You know you’re in love when you can’t fall asleep because reality is finally better than your dreams.”
― Dr. Seuss

“We accept the love we think we deserve.”
― Stephen Chbosky

“It is not a lack of love, but a lack of friendship that makes unhappy marriages.”
― Friedrich Nietzsche

“Love all, trust a few, do wrong to none.”
― William Shakespeare

“Have you ever been in love? Horrible isn’t it? It makes you so vulnerable. It opens your chest and it opens up your heart and it means that someone can get inside you and mess you up.”
― Neil Gaiman

“Being deeply loved by someone gives you strength, while loving someone deeply gives you courage.”
― Lao Tzu

“There is never a time or place for true love. It happens accidentally, in a heartbeat, in a single flashing, throbbing moment.”
― Sarah Dessen

“Love is like the wind, you can’t see it but you can feel it.”
― Nicholas Sparks

“You don’t love someone because they’re perfect, you love them in spite of the fact that they’re not.”
― Jodi Picoult

“If I had a flower for every time I thought of you…I could walk through my garden forever.”
― Alfred Tennyson

“When someone loves you, the way they talk about you is different. You feel safe and comfortable.”
― Jess C. Scott

“There are two basic motivating forces: fear and love. When we are afraid, we pull back from life. When we are in love, we open to all that life has to offer with passion, excitement, and acceptance. We need to learn to love ourselves first, in all our glory and our imperfections. If we cannot love ourselves, we cannot fully open to our ability to love others or our potential to create. Evolution and all hopes for a better world rest in the fearlessness and open-hearted vision of people who embrace life.”
― John Lennon

“Love is needing someone. Love is putting up with someone’s bad qualities because they somehow complete you.”
― Sarah Dessen

“Never love anyone who treats you like you’re ordinary.”
― Oscar Wilde

“The best love is the kind that awakens the soul and makes us reach for more, that plants a fire in our hearts and brings peace to our minds. And that’s what you’ve given me. That’s what I’d hoped to give you forever”
― Nicholas Sparks

“I have decided to stick to love…Hate is too great a burden to bear.”
― Martin Luther King Jr.

“They say a person needs just three things to be truly happy in this world: someone to love, something to do, and something to hope for.”
― Tom Bodett

“For the two of us, home isn’t a place. It is a person. And we are finally home.”
― Stephanie Perkins

“If all else perished, and he remained, I should still continue to be; and if all else remained, and he were annihilated, the universe would turn to a mighty stranger.”
― Emily Jane Brontë

“There is always some madness in love. But there is also always some reason in madness.”
― Friedrich Nietzsche

“If you remember me, then I don’t care if everyone else forgets.”
― Haruki Murakami

“I don’t trust people who don’t love themselves and tell me, ‘I love you.’ … There is an African saying which is: Be careful when a naked person offers you a shirt.”
― Maya Angelou

“Love is a fire. But whether it is going to warm your hearth or burn down your house, you can never tell.”

Singers And Musicians Born In February