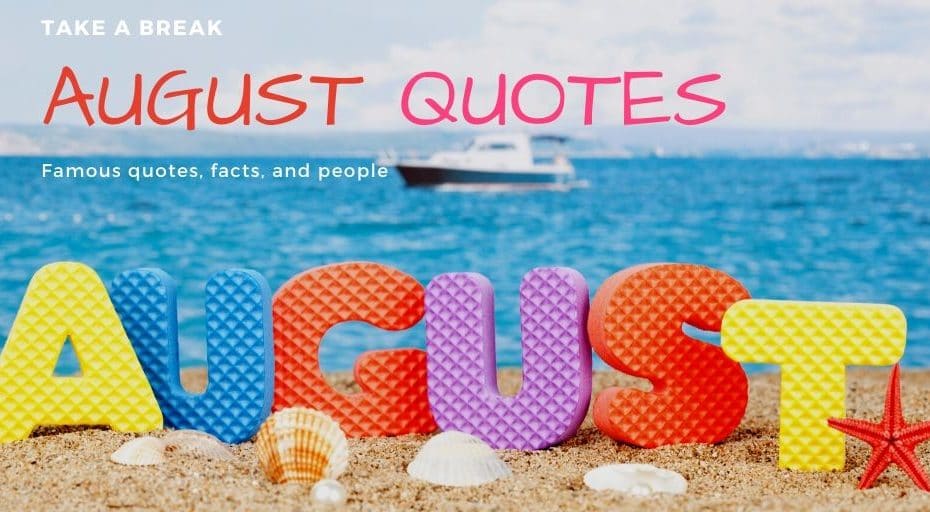 I always liked August. Long and warm days, going on summer holidays with my parents to the seaside. Plenty of happy memories from August.

But there’s the other side of August as well. Knowing that summer will be over soon and that fall is coming and with fall – the rain. Before we look at some beautiful quotes about August, let’s see what interesting holidays are happening.

There are some interesting holidays in August:

Facts About The Month Of August

What Is So Special About The Month Of August

“August rain: the best of the summer gone, and the new fall not yet born. The odd uneven time.”
― Sylvia Plath

“This morning, the sun endures past dawn. I realise that it is August: the summer’s last stand.”
― Sara Baume

“August was nearly over – the month of apples and falling stars, the last care-free month for the school children. The days were not hot, but sunny and limpidly clear – the first sign of advancing autumn.”
― Victor Nekrasov

“August is that last flicker of fun and heat before everything fades and dies. The final moments of fun before the freeze. In the winter, everything changes.”
― Rasmenia Massoud

“The month of August had turned into a griddle where the days just lay there and sizzled.”
― Sue Monk Kidd

“The grass in the back field was almost waist high, and now there was goldenrod, that late-summer gossip which comes to tattle on autumn every year. But there was no autumn in the air today; the sun was still all August, although calendar August was almost two weeks gone.”
― Stephen King

“Every year, August lashes out in volcanic fury, rising with the din of morning traffic, its great metallic wings smashing against the ground, heating the air with ever-increasing intensity.”
― Henry Rollins

“The children start school now in August. They say it has to do with air-conditioning, but I know sadism when I see it.”
― Rick Bragg

“August has passed, and yet summer continues by force to grow days. They sprout secretly between the chapters of the year, covertly included between its pages.”
― Jonathan Safran Foer

“Did you know that a bee dies after he stings you? And that there’s a star called Aldebaran? And that around the tenth of August, any year, you can look up in the sky at night and see dozens and dozens of shooting stars?”
― Elizabeth Enright

“August is a gentle reminder for not doing a single thing from your new year resolution for seven months and not doing it for next five.”
― Crestless Wave

“Breathe the sweetness that hovers in August.”
― Denise Levertov

“The first week of August hangs at the very top of summer, the top of the live-long year, like the highest seat of a Ferris wheel when it pauses in its turning. The weeks that come before are only a climb from balmy spring, and those that follow a drop to the chill of autumn, but the first week of August is motionless, and hot. It is curiously silent, too, with blank white dawns and glaring noons, and sunsets smeared with too much color. Often at night there is lightning, but it quivers all alone.”
― Natalie Babbitt

“August, the summer’s last messenger of misery, is a hollow actor.”
― Henry Rollins

“In August, an inescapable blanket of heat settled over Paducah, the last gasping breath of summer roaring its weight out over the populace.”
― Kelsey Brickl

“Less than a month ago all of August still stretched before us – long and golden and reassuring, like an endless period of delicious sleep”
― Lauren Oliver

“August is ripening grain in the fields blowing hot and sunny, the scent of tree-ripened peaches, of hot buttered sweet corn on the cob. Vivid dahlias fling huge tousled blossoms through gardens and joe-pye-weed dusts the meadow purple.”
― Jean Hersey

“August is the month of the high-sailing hawks. The hen hawk is the most noticeable. He likes the haze and calm of these long, warm days. He is a bird of leisure and seems always at his ease. How beautiful and majestic are his movements!”
― John Burroughs

“Everything good, everything magical happens between the months of June and August.”
― Jenny Han

“That August time it was delight / To watch the red moons wane to white.”
― Algernon Charles Swinburne

Singers And Musicians Born In August